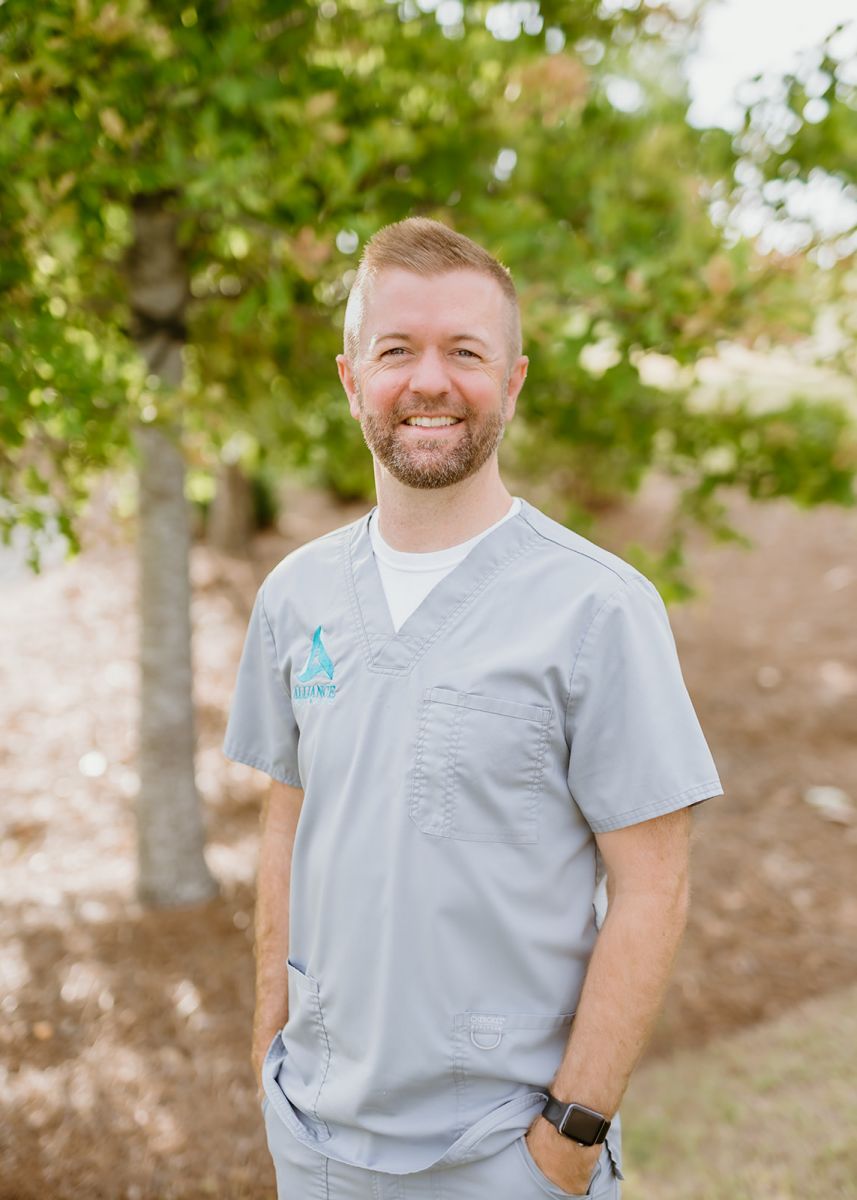 Jason Auyer is married to Rachael Auyer and is a father to their four sons: Samuel, Levi, Benjamin, and Matthew. He and his family currently reside in Flowery Branch, Georgia. He is a part of 12Stone Church and enjoys the outdoors, Syracuse football and basketball, recreational soccer and hanging with his family.

Professionally Jason's career began in 2005. Upon receiving his BSME ( bachelors in mechanical engineering) from Cedarville University, he worked under Jim Hughes and Marc Kaufman at the former Atlanta Prosthetics and Orthotics, as a technician. While there he received his certification in Prosthetics and Orthotics from North Western University. Immediately following he completed his orthotic and prosthetic residency under the supervision of Marc Kaufman, Jim Hughes and Will Holbrook. Jason has his national certification through the American Board For Certification in Orthotics, Prosthetics and Pedorthics and is licensed in Prosthetics and Orthotics through the state of Georgia. While working in the Atlanta, Monroe and Athen's offices he was promoted as a clinic manager for AP&O for the Gainesville office location. He held that position until Hanger acquired AP&O in 2014. While at Hanger Jason worked as the clinic manager for the Gainesville office for 10 months. He then took a position with Alabama Artificial Limb and Orthopedic Services. His dream was always to own his own office to provide quality care for patients, as well as, a space for professional development for practitioners. He specializes and is passionate for the pediatric community as well as dysvascular amputees.

For a full resume please see the CV attachment. Rachael Auyer is married to Jason Auyer and mother to their four sons: Samuel, Levi, Benjamin, and Matthew. Rachael received her BA in Secondary Spanish Education from the University of North Georgia, and formerly taught in Forsyth County Schools. She enjoys reading, exercise, family time, and is an active part of 12stone church. She currently is serving Alliance as a Marketing Director. She looks forward to working with patients to achieve goals while making lifelong friendships and connections. Alyson joined the Alliance team when they opened in October 2016 as the office and billing manager.  With the growth of the company, Alliance hired an office manager in May 2021, and she was promoted to chief financial officer.  She earned her bachelor’s degree in Business Finance from North Georgia College and State University and has had over 10 years of experience in the finance and accounting field.  Alyson handles all things related to accounting, billing, and compliance for Alliance.  Alyson cares deeply about our patients and works hard on their behalf to make sure we have all documents so insurance pays.  Alyson and her husband have 2 children.  When Alyson is not working, she enjoys spending time with her family watching movies, hiking, watching her children play sports, and working out.

Missy joined Alliance full-time in May of 2021 as, office manager for both locations. She has been in the medical world for over 25 years. Previously working as a medical assistant in Women’s health, she is so excited to begin this new chapter in management. She brings years of experience in patient care. Missy is passionate about making sure our patients, at Alliance, get the best care possible. Missy is confident that our staff will make sure your experience with Alliance is always top-notch. Jessica joined Alliance in June of 2020 as a Patient Care Coordinator for our Gainesville location and she now works as our administrative assistant in both offices. She was a manager at Chick-Fil-A for a time before bringing her drive for taking care of people to Alliance. She has a passion for making a positive impact on the lives of our patients. Jessica is a native Georgian, born and raised in Gainesville. When not at work, Jessica loves to play games, read, serve at 12 Stone church in the children's ministry, and spend time with friends and family. 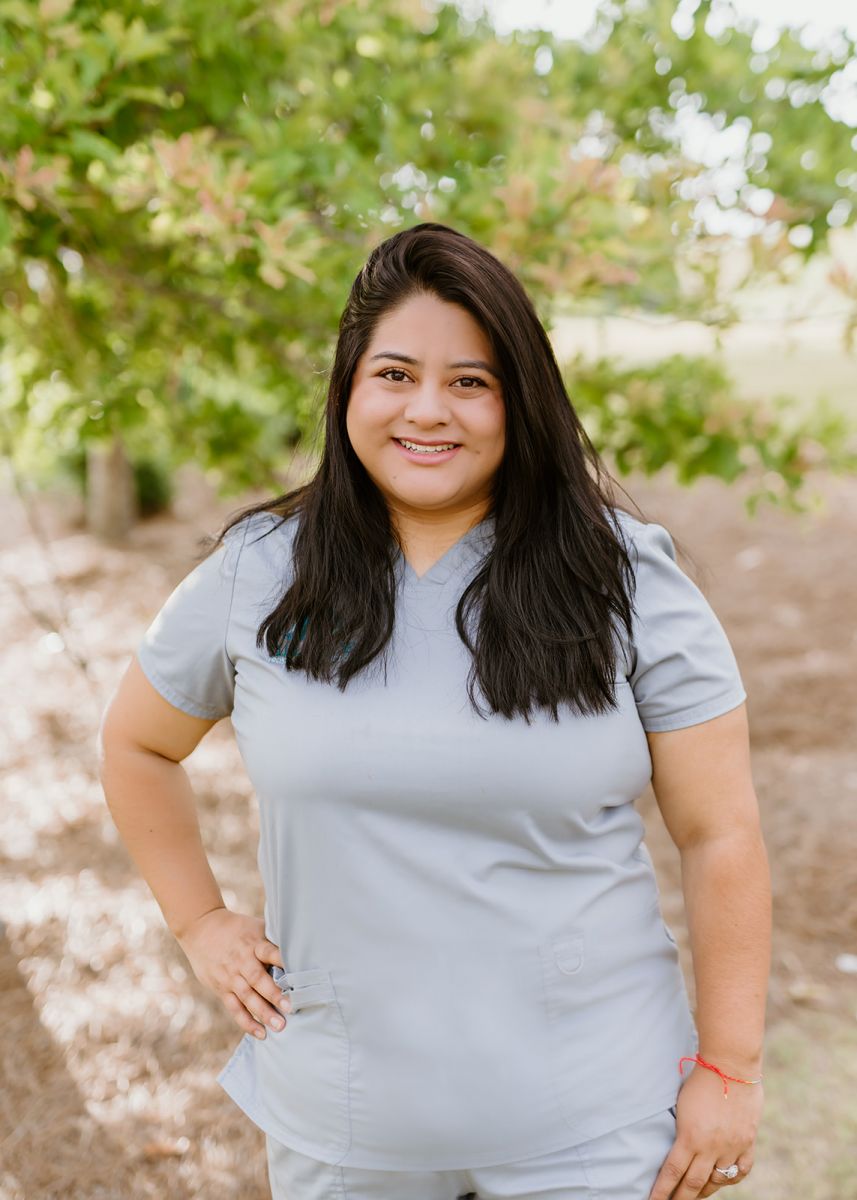 Leticia joined Alliance in August 2021 as a Patient Care Coordinator. She was born in Mexico and moved to the United States at a very young age where she grew up and married her husband Jairo. She worked in manufacturing quality for many years making sure customers were always satisfied with the products. Leticia has a passion for caring and loving others and making sure they are always happy. When Leticia is not at work, she can be found either at home cooking, watching movies, or at her church serving. Emily joined Alliance in 2019. She graduated from Indiana State in 2017 with a bachelor’s in health sciences with a concentration in Public Health. Emily has a passion for loving and serving those near and far in any capacity. When Emily is not at work, she can be found with a book in her hand, running, or spending time with her husband and their family in Michigan. Megan joined the Alliance team in 2021, after a 7 year career in Special Education. She has education degrees from the University of Georgia, Georgia Southern, and Georgia College and State University. During her time teaching, Megan realized her strengths were organization, data analysis, and routine- which have all been put to good use in her new role at Alliance. Her goal in any work she does is to be able to ease the burden of others and make life easier for others. Megan is native to Georgia, born and raised near and around Athens, GA. Go Dawgs! Megan and her husband, Taylor, have a daughter named Lillian and a Goldendoodle named Buffett. When not at work you can find her reading, watching movies, or spending time with her family. Laine joined Alliance Prosthetics and Orthotics in April of 2022 as a Patient Care Coordinator for our Braselton location. She received her bachelor’s degree of Science in Psychology with a minor in sociology from The University of North Georgia in 2020. She has a passion for helping people and making sure everyone’s voices are heard. When not at work, Laine enjoys volunteering at her church watching the 2–3-year-olds. She also loves going to the park with her dogs to walk and enjoys spending time at the lake with her family and friends. Onny joined Alliance in June 2022 as an Orthotic and Prosthetic Resident. She earned her bachelor’s degree in Psychology, Pre-Med from Georgia State University in 2019, and her Master of Science in Prosthetics and Orthotics from the International Institute of Orthotics and Prosthetics (IIOP) in 2021. Onny loves helping the underserved, creating meaningful bonds with people, and has always been a volunteer in her community. When she is not at work, she likes to sing, dance (Afrobeat and hip hop), write music, play piano, play tennis, spend time with family and friends, and enjoy all the little and big things life has to offer. 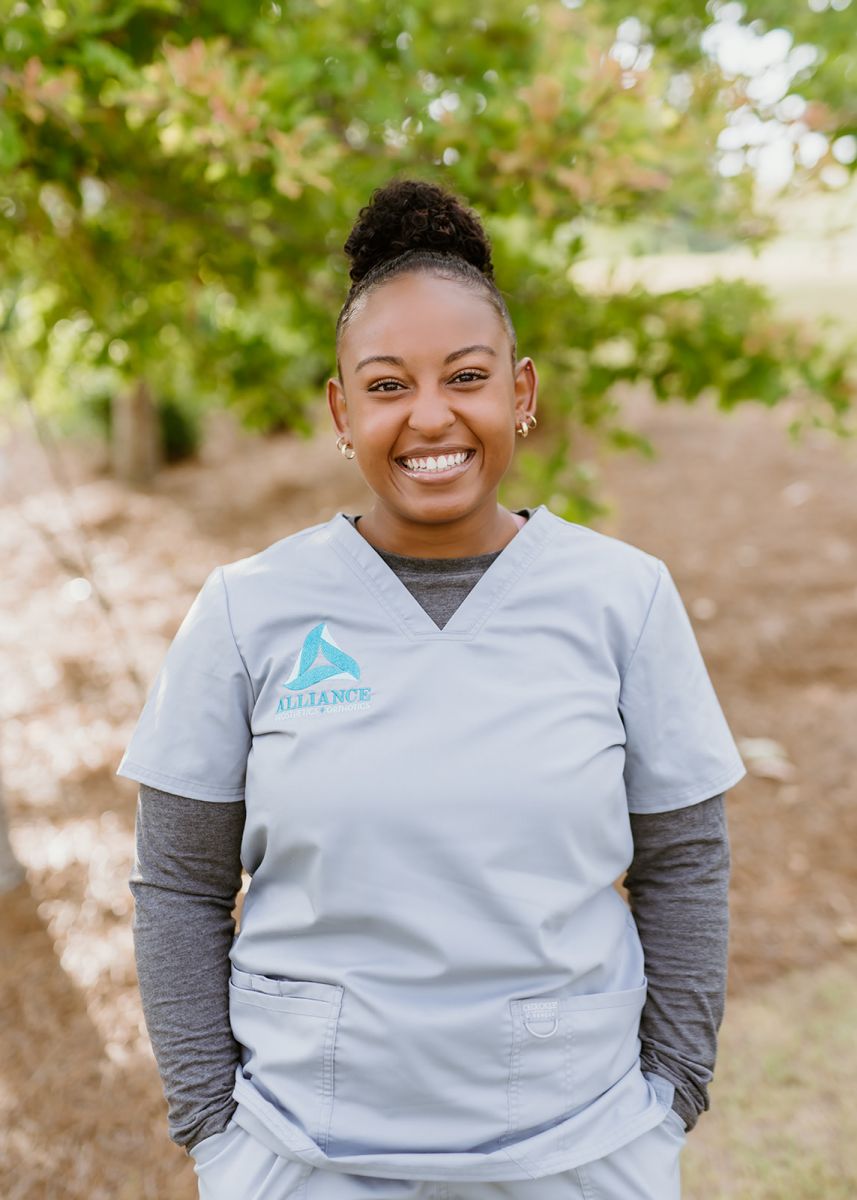 Victoria joined Alliance in June 2022 as a Prosthetic and Orthotic Resident. She earned her bachelor’s degree in Engineering Physics and a Master’s in Biomedical Engineering from Cornell University. She worked previously as a research assistant in the field of O&P and later wanted to work more directly with the patients. She then completed her Master’s in Prosthetics and Orthotics from Alabama State University in 2022. Victoria strives to be a jack of all trades and loves to learn new things. In her free time, she enjoys painting, exercising, and being outdoors. She enjoys spending time with family, friends, and her handsome dog, Gizmo.

Please check your email for your authorization code.